The term “Reads” can refer to many different things. For example, when someone says “reads” they could be talking about Meter Display Reads, Encoder Reads, Full Reads/Meter Visual Reads, or Billing Reads. Put another way, when looking at the dial on a water meter, a read could be:

This picture of a meter dial helps illustrate each type of read. Notice that there are eight numbers (16392000) across the top third of the dial, but only the first six digits actually move. The last two “fixed” zeros are printed on the dial. This means that the red rotating sweep hand points to the number that the fixed zeroes represent. That number is 15 in this example. 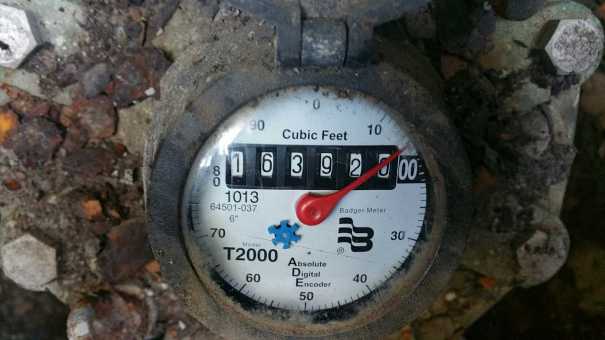 This table illustrates four different types of reads, what gets shown on the dial and the actual read. The table assumes an dial with a sweep hand.

When a read contains leading zeros, that is, the first n digits on the dial are zeros, visual reads might include the zeros or not.

Of course, there are other types of meter displays that do not have sweep hands or fixed zeros. This convenient interactive tool lets you experience how various endpoints and meters handle reads. Click the image below to open the Meter Tool in a new window. 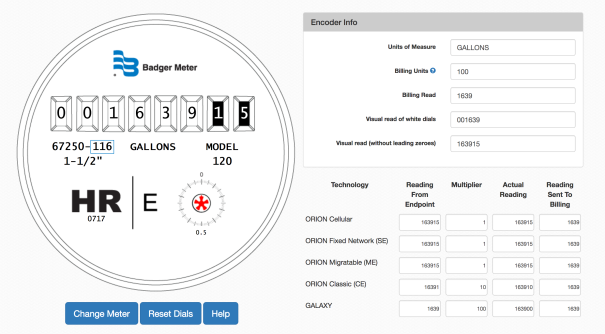 The following types of reads are found in AquaCUE for any given endpoint:

Different size meters have different resolutions. That is, a single sweep or rotation could represent 10, 100 or 1000 gallons or any other unit of measure. Many only read the leftmost four or five digits. In addition, they round to the nearest 10 or 100 units.